This page is for thoughts about mnemonics and Mandarin (the Chinese dialect).

The AA-ZZ celebrities article from earlier in this course would be a nice way to visualise a lot of pinyin - but there needs to be a rule about how the 2nd letter of an alphabet pair really means a Mandarin word ending such as 'iang'. If 2nd letter R means 'iang' then letter pair NR implies 'niang'. A letter pair beginning with W is a way to state the pinyin endings. Eg. WR would be 'iang' [yang] since R represents 'iang'. If a pinyin word begins ch or sh or zh then the first letter pair letter needs to be A or E or I respectively.


A small number of pinyin are not covered by this approach. They would need separate menmonic images. The Woman 1000 system can use images of women's actions to represent 2 letter pairs; and so they can be used to memorise Pinyin.

Tones make the same syllable sound different. There can be no tone or one of four standard tones: 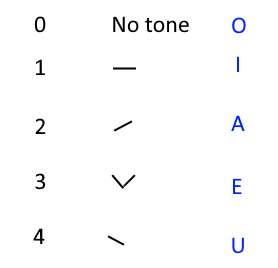 I put the 5 mnemonic counting vowels to the right of the tone accents. The tone accents occur above a syllable to inform the Pinyin reader which tone to use.

Within the Foreign Language article, I wrote how an image hovering above the action scene can be an indicator of extra infromation. Tones could be implied by Town icons which can float above scenes. If a word has only one single tone then Town 100 icons SO, SI, SA, SE, SU could be chosen from - like the German prefix Town 100 icon example in the Foreign Language article.

But 2 tones in the Pinyin could be represented using a consonant and a vowel: 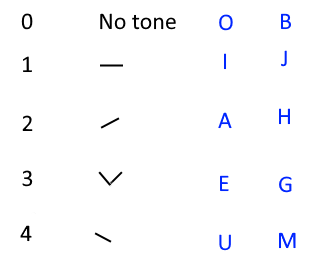 The Elements 118 article associated a brush stroke with each Element person. So, if I write a sentence that mentions Liv then that might indicate the brushg stroke that is associated with Liv in that Elements article. live is 03. I look down to the bottom of that article and see a diagonal stroke that matches 03.

If I know exactly how to draw the character that means 'leg' then I could use the word 'leg' in the sentence to indicate that that entire character should appear; or I could mention 'Miss Leg' who is person 010 of the Woman 1000 system.

Gradually, a sentence is being built that contains a sequence of brush strokes.

Another way to refer to a brush stroke is to use the numbered acrostics from the Acrostics article. Two words can imply two digits. Eg. Enjoys Music is E=3, M=4 and so brush stroke 34 is implied. Exceptionally, for a stroke that is 100 or higher, a word beginning with V is used in the sentence to mean 100+ and then the next two words spell out the remaining 2 digits. Eg. 'Very Busy Day' is 100+ , B=0, D=4 : brush stroke 104 .

I can imagine Woman 1000 person 300 (Miss Cotton) saying a sentence. If I learn the sentence then I learn some of the brush strokes needed to draw the strokes of 'cotton'.

This seems like a reasonable approach but Mandarin is not my specialism. It would be good to hear feedback.

(The numbered strokes are based on a list I saw on Wikipedia.)