We can use the BLOKES system (described earlier) to explore the idea of memorising a sentence by storing one word at each peg location along the route.

In the shorthand lesson, AU is shorthand for the word 'authority' ; there is an AA to ZZ system lesson earlier in this course where AU can be represented as a particular actor from a comedy movie. So that would be one approach to storing 'authority' at a BLOKES 'area of a room' location.

The shorthand sometimes uses a letter followed by a digit as a way to represent a word. At one time, my solution for visualising a 'letter then digit' shorthand code was to have animal images where each animal represented a letter and a digit.

D2 is 'decide' in the shorthand. There is an animal cartoon image that represents D2. However, I came to the conclusion that a better way to represent the shorthand visually would be to have a system of about 1000 cartoon women and a system of about 1000 cartoon men. So I then had to re-purpose the animal cartoon images. I mention them in the '31 x 12' calendar article, for instance.

I will briefly comment on the animal images which either represent a 'letter then digit' or a 'digit then letter' (520 images in total).

Each letter of the alphabet is represented by an animal type such as a baboon. There can then be 10 colourful examples of a baboon as cartoon images to represent the 0 to 9 instances of a letter followed by a digit.

5D is 'where these' and can also be represented by one of 10 animal examples.

Below are example cartoon images for representing a digit and letter or a letter and a digit:


In the images, every animal is presented with humanoid aspects like they all have a T-shirt!

I want them to be able to do human-like actions; so I think it is OK to present them in a humanoid way.

I modified them in 2022 for facial characteristics to be largely consistent with the Male 1000 system.

But the 'shorthand images' are now the images presented in the Woman 1000 system and Male 1000 System articles.


Using the animal people as a reduced AA-ZZ system

The animal people are also mentioned in the '31 lists of 12' article as a way to represent visually the 360+ days of a year.

I was thinking what clothing and clothing colour to give the animal people; and I just used a T-shirt in black as a torso; and left it as a question to answer more fully at a later date. Maybe you could use the colour of trousers or shorts or other lower clothing to mean a letter of the alphabet: so over 500 animal images recalled in sequence could prompt 500 things? Maybe the choice of clothing would mean the second letter of the prompt?

Since I doubt I will use the animal people to memorise dates often, maybe I could use them to represent AA-ZZ images; but there are only 520 animal images in total; so why not just represent the letter pairs that you tend to find most in a dictionary: consonant then vowel, vowel then consonant?

If, at a peg location, I imagine an AA-ZZ article hero and an animal person then it would effectively represent the spelling of 4 letters. Eg. If I want to memorise "Situation", I can store SITU at a peg scene as a prompt of "Situation"; and the two images used would be the SI hero and the T4 animal person: T4 is effectively TU.

In the 31 Lists of 12 article, you will see my thoughts on what the clothing of the Animal People could be. Here though, an alternative further thought about how lower clothing could represent a letter of the alphabet is to use the 10 under clothing that you see in the Male 1000 article and to use 3 colours of shoes: yellow, red, blue. Those 30 combinations would be enough to represent the English alphabet. I had to adapt the images so that each image has a pair of shoes: 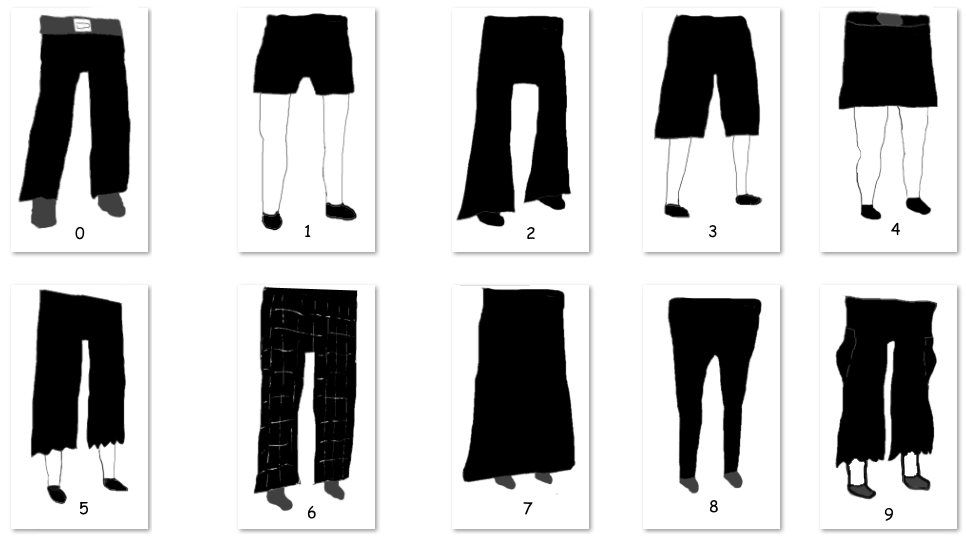 My early work gives all animal people black T-shirts but my long term aim is to apply 10 colours to the clothing of the animal people: one colour per letter implied: N, T, C, S, R; and for the calendar related animal people to have one of 31 uniforms.